In the Spirit of Crazy Horse?.

Th Days of Native Americans’ Culture was the whole project taking place in Kazimierz Wielki University in Bydgoszcz, October 17th-19th. There were a lot of different activities such as: Indian Handicraft Exhibit, Pow Wow Dances, movie display followed by open discussion (it was shown Soldier Blue movie directed by Ralph Nelson) and the Night of Indian Poetry. The most important activity though was going to be the science conference (concerning North America Indians) with the theme In the Spirit of Crazy Horse? that will take place on October 19th. The conference was for one whole day and there were nine lecturers giving speeches (including two lecturers from Italy and one from USA). The honorary patron of the project was the headmaster and Rector Magnificus of Kazimierz Wielki University, prof. Jozef Kubik.

IN THE SPIRIT OF CRAZY HORSE ?

The purpose of the project is promoting the culture of Native Americans in Poland (in Bydgoszcz) and also the purpose of the conference itself is to answer the question if the path of collaboration and partnership between Indians and other tribes or white people (in the past as well as present day) was not the only one for Indians to preserve their own native life path.

Everybody is the Good One! Living History and Monuments at the Little Bighorn Battlefield Site

Indian’s Matter as a Result of Crash of Two Worlds

the Distance, the Foto Autoportraits of Two Small Communities in Canada and Poland

The Spirit of Crazy Horse, That Is Problem With Tradition

In the Spirit of Crazy Horse … – Modern Relations: Between Past and Present

For the Better Tommorow? U.S. Treaties Policy to the Great Plains Indians on an Egzample of Cheyenne Tribe

and Film as a Way for Indian’s Identity

After conference emerged a short article in the U.S. Embassy website:

Cultural Attaché James Wolfe spoke on 515 Years of American Indians’ relations with European colonizers and the United States Government at the conference “In the Spirit of Crazy Horse?” at Kazimierz Wielki University in Bydgoszcz October 19. The conference marked the end of Native American Days, which ran October 17-19, and was organized by the Polish Society of Indian Americans Friends and the University. The University library also displayed an exhibit of American Indian costumes, tools, and other artifacts, some genuine and some creations of local artists, including Professor Adam Piekarski, who was the main organizer of the events. Other speakers included Sandra and Flavia Busatta of Padova, Italy, who presented a film on the Battle of Little Bighorn; anthropologists Dr. Alicja Fron (Jagiellonian University) and Dr. Bartosz Hlebowicz (University of Warsaw) who presented a photographic project linking Oneida Indians and a small village in eastern Poland; and Marek Nowocien and Marek Maciolek of Tawacin Indian Magazine. 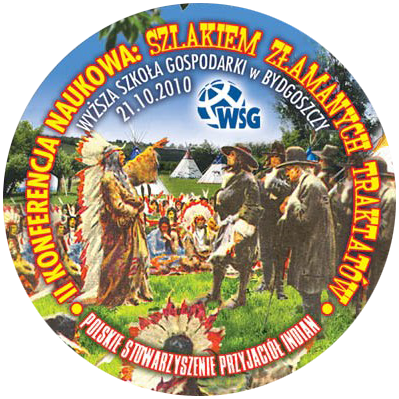 On The Trail Of Broken Treaties.

University of Economy in Bydgoszcz (Poland)

ON THE TRAIL OF BROKEN TREATIES

Are treaties with Native Americans acts of international law, agreed between the self-governing, independent bodies, valid today as much as they were in the past, or are they relics of the past, being evoked only in recent decades to re-establish political reality that seemed to be gone for good? We would like to discuss the contexts in which treaties with the Native Americans were made by the colonial powers, both in pre and post Revolutionary era. Ultimately, the aim of the conference is to address the issues of contemporary significance of Indian treaties, in broad context as well as focusing on case studies. Thus we invite the exchange of thoughts and opinions about the Indian treaties from both the historical and contemporary perspective.

The conference seeks to popularize Native American studies in Poland where, unfortunately, no university department or institute of Native American Studies formally exists. Therefore the conference is addressed to the Universities lecturers and Universities students of cultural and historical departments in Poland, also of both Bydgoszcz universities: The University of Economy and the Kazimierz Wielki University, as well as to anybody interested in Native American studies, American studies, American history, and American anthropology. The speakers are asked to be ready to also play the roles of teachers, educators and promoteurs of the knowledge on Indian cultures. After each lecture there will be time for discussion and for questions from the audience.

University of Economy in Bydgoszcz

Chief of the Non-Immigrant Visa Unit at the U.S. Embassy in Warsaw since July 2008. Prior to serving in Poland, Ms. Biskup also worked in the U.S. embassies in Guatemala and Germany, as well as the U.S. Consulate in Tijuana, Mexico. She is originally from Chicago, where she graduated from DePaul University with a degree in political science.

Past and Present inter-tribal and governmental politics of the Lenape Tribe.

Former Assistant Chief of the Delaware Tribe of Indians (the largest band of the Lenape Tribe with about 12,000 members). He is interested in preservation of Culture, Traditions and Language. Works at the Conner Praire Living History Museum, Indiana.

Doctorate candidate of the Albert-Ludwigs-Universitat Freiburg, conducted fieldwork among various Iroquois groups in the U.S. and Canada (His work in the Museum of Ethnology in Freiburg included exhibitions about Native American Culture). Currently he is working on the Ph.D.thesis on the Iroquois identity and land claims.

(As Children under the Protection of this Government). On Diplomatic Culture in Colonial Pennsylvania

An anthropologist (Ph.D of the Jagiellonian University), author of the books “Nowa Wola Simply” and “Odnalezc nasze prawdziwe sciezki” [To Find Our True Ways] devoted to the Nanticoke Lenni-Lenapes of New Jersey and the Oneidas of the New York State. Co-editor of the quarterly TAWACIN, translator of the anthropological and historical books into Polish.

The Differences and Similarities between the Treaties Made by the British and the United States Governments with the North American Indians: A Short History

Sociologist, author of the four books on the history of the American Indians, translator (Robert M. Utley: “The Lance and the Shield. The Life and Times of Sitting Bull”, Robert W. Larson: “Red Cloud.Warrior-Statesman of the Lakota Sioux”), cooperator of the TAWACIN quarterly.

A historian (Kazimierz Wielki University, Bydgoszcz), works on the book about the American government’s treaty policy regarding Plain tribes, contributor to TAWACIN quarterly.

The Shinnecock Indians – Three Centuries of Struggle for Land: From the Thousand Year Lease to the Federal Recognition Application Process

MA candidate in the Institute of Ethnology and Cultural Anthropology of the Warsaw University. In summer 2009 she conducted a fieldwork research among the Long Island Indians.

On October 14th at the University of Bydgoszcz the show will take place of documentary film about Native Americans. This show will stage within Reportage Art Festival CAMERA OBSCURA which is an interdisciplinary event dedicated to a reportage genre in different fields of art and media by Art-House Organization and Adam Piekarski who represents Polish Association of Indian Friends (PAIF). During event we will show documentary film “Ojibway Indians” directed by Katarzyna Masin (Poland). This show is a prologue and part of the conference titled “On the Trail of Broken Treaties”.

NOVEMBER THE 4th – CONCERT IN CITY CULTURE CENTER IN BYDGOSZCZ!

With great pleasure I would like to inform about JOANNE SHENANDOAH’S visit in Bydgoszcz in Autumn, November 4th.  This visit is the result of my many efforts. Also I would like to thank my friend Harry Shueler for helping me with the very first contact with the singer. I expect this will be a significant event and for that reason many institutions cooperation is very much needed. The project is supported by the following: City Cultural Center in Bydgoszcz and United States Embassy in Warsaw. The event is also supported by: PZU ZYCIE SA, University of Economy in Bydgoszcz, Kujawsko-Pomorskie Szkoly NEKS, INWEST PARTNER. Finanse dla Ciebie, Winiarnia u SOWY. Restauracja. Winiarnia. Kawiarnia – Mostowa 5 and Polish American Indian Friends Association (I am a Vice-Chairman of the Board of PAIFA).

She is a GRAMMY AWARD winner, 13 time NATIVE AMERICAN MUSIC AWARD (The Native American Music Association & Awards, NAMMY) winner with 15 recordings to date. She has captured the hearts and souls of audiences all over the world, from North and South America, South Africa, Europe to Australia and has been praised for her work of Peace and hope. Shenandoah has performed at prestigious events such as Woodstock 94, The Parliament of the Worlds Religions (Africa, Spain and Australia), The White House, Carnegie Hall, 3 Presidential Inaugurations, Madison Square Garden, Crystal Bridges Museum an National Museum of the American Indian. Joanne Shenandoah has given hundreds of lectures and workshops throughout the world, to commencement speeches and multicultural affairs.

Over time Joanne Shenandoah’s been able to channel her love of pop, folk and classical into her ancestrally inspired music and her music has been used in many soundtracks to include HBO, PBS, Northern Exposure, Bose Systems, The Discovery Channel and TRANSAMERICA to name a few.

Associated Press wrote about her: “She’s become one of the most acclaimed Native American recording artists of her time”.

The famous guitar player Neil Young said: “Joanne Shenandoah is one of the finest tributes to Native American Music and Culture”.

“She weaves you into a trance with her beautiful Iroquois chants and wraps her voice around you like a warm blanket on a cool winter’s night,” said Robbie Robertson (Mohawk), formerly of the Band, who used her voice on his solo album Contact From the Underworld of Redboy.

The last CD titled Lifegivers is a tribute to the life cycles of women from the first beating of the heart to when her spirit leaves to walk across the stars along the Milky Way as she returns home to the Skyworld where she will be welcomed by her loved ones. Each song is meant to bring the listener to a place of celebration for every cycle of life. As I asked for these melodies to flow, I realized I was inspired by different aspects of rhythm and music from different cultures of the planet. It has been my great honor to be able to be embraced by many lifegivers of the world; new borns, young women, pregnant women, women in love, women who sing, women who teach, and women of wisdom.

This will be the singer’s first visit in Poland and the only concert in Bydgoszcz.

With Joanne Shenandoah there will be coming Doug George-Kanentiio (Mohawk-Iroquois), an award winning author, film consultant, journalist and the lecturer of Iroquois’ culture topics. He will give a lecture at the University of Economy.

Joanne and Doug are on the board of the Hiawatha Institute for Indigenous Knowledge.

Link to the official website of Joanne Shenandoah http://www.joanneshenandoah.com

I invite all of you to Bydgoszcz, at November the 4th, to Joanne Shenandoah’s concert!